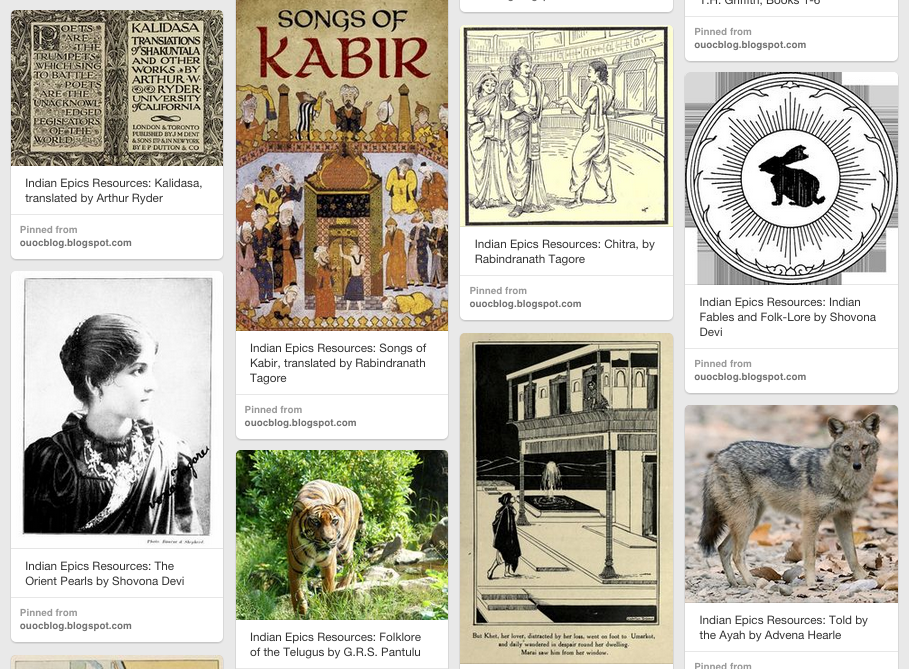 There are 50 books there now, although some books can be used for multiple units, so the number of possible units is quite large, and I already have 16 units available from the Indian section of the Myth-Folklore class. So, an abundance of material: no worries there!

And here is the big revelation that I had just today about how to REORGANIZE the weekly readings in a way that will help students better manage the "flow" of readings in the class so that the overall purpose and design of the reading will make more sense to them. I am really excited about that because, to be honest, I was kind of worried about how that was going to work. Unlike the Myth-Folklore class, this course does have an overarching structure, instead of completely free-standing weekly units. So that makes the flow from week to week really important.

This is how it will work:

Weeks 5-6-7. Mahabharata. We will start off reading a two-week version of the Mahabharata: once again, that can be the prose version by Narayan (for students who prefer a printed book) OR the two-week anthology that I prepare. Then, for Week 7, students will choose a one-week version of the Mahabharata to follow up and reinforce what they learned from the first version: that would either be the Wilson version or the Monro version, or spending one week on the Bhagavad-Gita, or one week on Nala and Damayanti (Mackenzie version) or one week on the story of Savitri (I would probably pull the Savitri unit together from a couple of different sources).

Then, in the second half of the semester, it would be all free choice from a huge variety of sources.

EPICS. For students who really are enjoying the epics, there would be lots of Ramayana and Mahabharata reading that they can do (with reading units that are one, two, three or four weeks in length). They would at that point be able to CHOOSE which epic they want to focus on, based on what they learned in the first half of the semester. I have lots of good reading options online for both epics, along with the two paperback books by Buck which I have ordered in the past and will continue to order so that students who do prefer a printed book can have one.

HINDUISM. I have some great reading units lined up for students who are interested in the gods and goddesses along with the heroes and heroines of the Indian tradition, some of whom they will have encountered (if only briefly) in the epics. I am especially excited about the materials related to the life of Krishna!

BUDDHISM. I have some good reading units on the life of the Buddha, along with the amazing Jataka storytelling tradition.

FOLKTALES. Finally, I have an enormous collection of Indian folktales and fairy tales which are also available for students to read. My guess is that the students who just are not into the epics at all might spend the second half of the semester reading these types of stories, and that would be fine with me! Many students are in my class because they need a Gen. Ed. Non-Western credit, not because of any interest in the epics. So, if they decide they want to spend the semester reading Indian folklore, that would be great — plus, they will have a much better understanding of the cultural context of those stories after reading the epics, as the gods and goddesses often make appearances in the stories, along with allusions to the characters and events of the epics, etc.

So, overall, I am REALLY pleased with this reorganization: it's much more flexible, and it will also "show" students in the design itself just how the class is laid out, helping them to learn more and more about the Indian storytelling tradition each week. Best of all, as they learn more, they will be able to make better and better choices about just what they want to read as they continue broadening/deepening their knowledge all semester long.

Next Step: I need to go through this model and come up with a minimum set of materials that I need to have prepared in advance to launch this new model in the Fall. That will be fun: I am so excited about all of this!

Email ThisBlogThis!Share to TwitterShare to FacebookShare to Pinterest
Labels: IndiaUnTextbook