Well, I have been terrible at documentation for the new semester. I get all caught up in the fun and excitement of the classes themselves, and that means I run out of time for documentation. It's not that documentation is totally un-fun and unexciting... but it's never as exciting as getting to meet all the new students and trying to make sure the class is going well for them!

Anyway, it is now the end of Week 3, and one of the new experiments for this semester is going even better than I expected, so I wanted to write it up here: My New "Comment Training" Strategy. 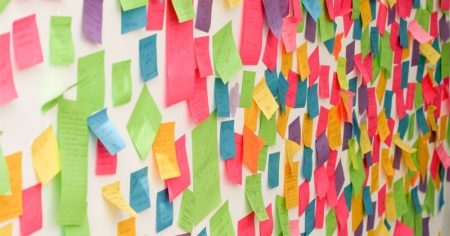 In the past students have struggled with giving comments to other students. There was no lack of enthusiasm, and the comments were always encouraging, but they were often vague and, as a result, not very useful to the authors. When I asked the students last semester about what kinds of comments were most useful to them, the universal response was that they wanted more critical feedback, comments they could actually use. You can see some of those student responses here: Thoughts about Comments.

Ironically, the students who were frustrated by the vagueness of the comments they received were also probably guilty of leaving vague comments themselves because, overall, the comments did tend to be vague. Enthusiastic, friendly, encouraging... but vague, very generic, without a lot of detail.

So, I decided to try something different this semester. In the past, there were several weeks devoted to helping students get used to using Google Sites. I decided that I could actually fold the Google Site practice into another assignment (I'll explain about that in a separate post), and thus find room for a kind of "Comment Training" series of assignments. It's a four-week sequence that works like this:

Week 2: Holistic and Analytical. In this assignment, I try to get students used to the idea that when they read a story for the purpose of leaving a detailed comment, they should read the story twice: once holistically for an overall impression and THEN analytically, focusing on specific features of the story. To practice these skills, I ask the students to leave 150-word long comments on three students' Storytelling blog posts (their choice). I was amazed at how well this went! It was a night-and-day difference compared to the kinds of comments I typically saw in past semesters.

Week 3: Format and Function. In this assignment, I provided a list of more technical features that students might want to comment on. I used the word "format" to refer to web presentation (fonts, colors, layout, etc.), and "function" to refer to web links, navigation, etc. I then asked students to leave 150-word long comments on three other students' Storytelling blog posts in which they read holistically and analytically while also checking on format and function as appropriate. So far, the results of this assignment also look excellent. (Most students will be doing this assignment tomorrow, on the Sunday of Week 3.)

Week 4: Author's Note. In addition to having trouble with comments, students also had trouble writing their Author's Notes. It's a similar problem: in the same way that they were not used to providing critical commentary on other students' writing, they were not very skilled at providing critical commentary on their own writing. I am really optimistic, based on the success of this experiment so far, that with a little training and practice I can help all the students to write better Author's Notes (and, of course, they will benefit from that as readers because they will get to enjoy better notes at other students' stories). For this assignment, I'm asking students to go back to the Author's Notes they wrote on their stories so far this semester and expand/improve them.

Week 5: Final Practice. This is the last week before students start writing comments on each other's Projects. So, this assignment actually has three parts: (1) students set up the Comment Wall at their blog for incoming comments (their Storybook Projects are separate websites, but the peer comments on those websites come in via the blogs), (2) they review the methods for keeping track of incoming comments at their blog, and (3) they write one last practice comment on another student's Storytelling blog post, practicing the skills they learned in Weeks 2, 3, and 4.

Although it is still not even half-way through this experiment, I am so excited by what I have seen. I'll update this post when I can report more confidently on the overall success of the experiment, but I am really pleased about this! I always thought it would be too difficult for me to take on the task of really "teaching" students how to do comments, and instead I relied on my comments as a kind of model for students to follow. For some students, that modeling was enough, but the majority of students needed something more. So far, it looks like this simple four-week "course" in commenting will make a big difference.

Even better: if students can learn to do a better job of commenting critically on other people's writing, it might also help them become more critical readers of their own writing.

So, there is a lot of great potential here, with lots of good indications so far. I will report back in a few weeks about the overall experiment, along with some ideas about what I will need to do differently next semester.

In order to see what's going on in the class right now, I've embedded the live comment stream below: you can see how it is going for yourself! If you browse through the stream (also available as a webpage of its own), you will see some of the detailed comments that people have left, along with the more informal weekly blog comments that are much shorter and more casual. Both kinds of comments are useful and important: the short, casual comments are the chit-chat that makes the class fun and friendly, while the longer, more detailed comments are important in helping people to revise and improve their writing. And yes, this is a class where students revise... and revise... and revise some more — hopefully based on comments from many readers, not just me! :-)