As a follow-up to the post about the Class Announcements blog, I want to say something in this post about Twitter. Having a dedicated class Twitter account is new for me this semester (Fall 2014), and I am so pleased at how it is working!

BRIEF DESCRIPTION. I have a personal Twitter account, OnlineCrsLady (although I use it for professional networking; it's not personal in the sense of being about my private life), and I also have a class Twitter account, OnlineMythIndia.  There are class-specific hashtags: #OU3043 (that's Myth-Folklore) and #OU4993 (that's Indian Epics). At my personal Twitter account, I have two important school-related lists: OU Faculty and Staff and also OU Programs (excluding sports). I keep a Twitter widget of OnlineMythIndia in the sidebar of the class announcements blog. Via that Twitter widget, I am able to share a stream of content, frequently updated, that is both fun and useful: information about campus events, beautiful online resources, all kinds of stuff! Here's a screenshot of how that works: 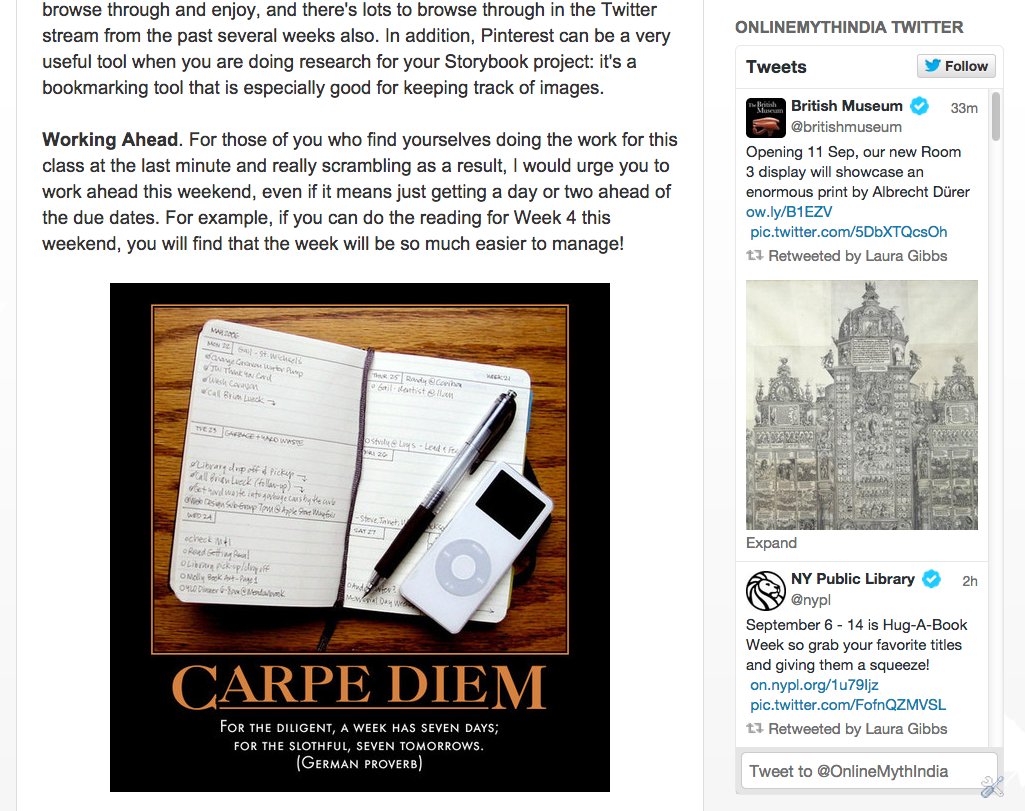 I don't always use the hashtags, but I try to remember to do that. With the students, the hashtags could become very useful if they are tweeting for class inside their already-existing Twitter account. That's something I'll be figuring out as we go along this semester! I set up Tagboards for both hashtags (#OU3043 and #OU4993) in case students do get into using hashtags! I need to write up a separate post about how I am hoping that students will start using Twitter for class; it's still early days, though, and I'm thinking it will really start happening when their projects go online a few weeks from now.

For now, though, even just as a new form of class announcements, Twitter has worked out wonderfully. I love having all this good stuff to share all throughout the day so that the announcements really come to life! Here is the dual-account routine which I follow periodically throughout the day, about every hour or so — it just takes a few minutes now that I've gotten used to the routine:
If there is time — but there usually isn't — I look at my personal Twitter timeline, which contains a lot of edtech. That is of interest to me, but of less interest to my students, so that is a lower priority. I still really rely on Google+ and the blogs I follow for edtech news; I still haven't really gotten into the swing of the edtech Twitter world.

HISTORY. Twitter is something very new for me. In Fall of 2013, I was involved in a series of absurd events at my school that resulted in my creation of those two OU Twitter lists. That proved to be such a good way to interact with other people at my school (none of whom use Google+ ... alas) that I started using Twitter more and more during the Spring 2014 semester. That positive experience prompted me to create the class Twitter account in August 2014, and everything then fell into place perfectly as described above. I am having so much fun with Twitter now, and I am very optimistic that I will find yet more ways to make use of it in the future.

GOALS. I have several goals here:

People who know me online are probably surprised by how I have FINALLY gotten into the swing of using Twitter. I tried and failed, tried and failed, and tried and failed again — I just could not find my Twitter groove. Now, though, Twitter is very much a part of my daily routine, and I would miss it if I were gone. Google+ is still my main go-to place online, but it really does not offer a productive back-and-forth channel with my class. Twitter has the advantage of being something familiar to my students, and I am hoping to catalyze some new use of Twitter by the students this semester, too. More on that student Twitter experiment later on. I'm hoping good things as the semester gets underway!

I also need to work on building my own content streams to share for Indian materials. I have not had as much luck finding Twitter streams that are India-related (although I have found some great Pinterest Boards for India), so I am thinking of tweeting content myself for Indian Epics, maybe setting up a half-dozen or so items to tweet every day. I've got almost a thousand images over at the class resources blog, plus a couple hundred Indian folktales in the UnTextbook... so it wouldn't be hard. Even just tweeting the wonderful Wikipedia articles about the main characters in the epics might be useful. Anyway, something to ponder — something FUN to ponder. :-)